Nigeria’s 2019 elections through the lens of network measurements

Leading up to and during Nigeria’s 2019 general elections, we collaborated with our local partner, Paradigm Initiative, on measuring networks in the country to monitor potential censorship events.

Our findings are included in a joint research report published today with Paradigm Initiative. The full report, titled “The 2019 Nigerian Elections through the lens of digital rights”, can be downloaded here.

This post summarizes OONI findings based on the analysis of all network measurements collected during Nigeria’s 2019 general election period.

The aim of this study is to examine whether and to what extent internet censorship occurred during Nigeria’s 2019 general elections.

The methodology of this study involves:

OONI Probe is configured to measure the blocking of URLs included in the Citizen Lab’s test list repository on GitHub.

Given that OONI Probe only measures the websites included in these lists, the measurement findings will only pertain to those specific websites. Updating these lists on an ongoing basis is therefore crucial in ensuring that the tested websites are operational and relevant to the questions that researchers are interested in answering.

As part of this study, we collaborated with Paradigm Initiative on making multiple updates to the Nigerian test list. More recently, these updates included adding a number of Nigerian media websites, local human rights sites, and political sites - particularly sites related to the Nigerian 2019 general elections. This helped ensure that all OONI Probe users in Nigeria would test a wide range of media and political websites, monitoring the accessibility of these sites during the election period.

OONI Probe tests have been run in Nigeria since 2014 from multiple local vantage points.

As part of this study, Paradigm Initiative coordinated with local OONI Probe users across Nigeria to run tests on multiple different networks. Most tests were run by volunteers using the [OONI Probe mobile app](https://play.google.com/store/apps/details?id=org.openobservatory.OONI Probe), which doesn’t currently include the Vanilla Tor and Tor bridge reachability tests (these tests are only available on the [OONI Probe versions for macOS and Linux](https://ooni.io/install/OONI Probe)). Measurements from these two tests are therefore out of scope for this study.

Most OONI Probe tests run as part of this study measured the blocking of websites, as well as the potential blocking of WhatsApp and Facebook Messenger. For more targeted website testing, we generated OONI Run links, containing lists of Nigerian media and political websites, which we shared with local OONI Probe users. This helped ensure that sites that were more relevant to the elections were tested as much as possible (and from as many different ISPs as possible).

Throughout February 2019, 5,1660 OONI Probe measurements were collected from 16 distinct ASNs in Nigeria.

OONI Probe measurements have almost continuously been collected from Nigeria since 2014. Since the aim of this study is to examine potential blocking of websites during Nigeria’s 2019 general elections, we limited our analysis to measurements collected from 1st February 2019 to 31st March 2019.

By default, as soon as anyone runs OONI Probe, their network measurements are automatically sent to OONI’s servers, processed by OONI’s data processing pipeline, and published on OONI Explorer and on the OONI API. As a result, all OONI Probe measurements collected from Nigeria have been openly published since the tests were run, and the analysis of this study is based on these openly published measurements.

While published measurements are pre-processed based on a set of heuristics (for example, depending on test methodologies), further data analysis is required to rule out false positives, examine network anomalies in more depth, check whether network anomalies are triggered by other factors (such as server-side blocking), and examine network anomalies over time and across ISPs. This is especially necessary when ISPs don’t serve blockpages, but implement internet censorship through the use of more subtle techniques which may make confirming censorship more challenging.

Most of the tested websites (i.e. the URLs included in the Citizen Lab’s global and Nigerian test lists) were accessible in Nigeria throughout the 2019 general elections. The testing of WhatsApp and Facebook Messenger didn’t present any signs of network interference during this period either. OONI measurements therefore suggest that Nigerians had access to popular online platforms throughout the 2019 general elections.

Last year, OONI and Paradigm Initiative co-published a research report which offered an analysis of OONI measurements collected from Nigeria. Our findings showed that while most tested sites and services were accessible (including internationally popular platforms, such as Facebook and WhatsApp), a number of websites associated to the secessionist movement of Biafra were blocked.

Our latest analysis of OONI measurements shows that the same sites remain blocked in Nigeria.

Blocking of sites associated to Biafra

The Nigerian Civil War between 1967 - 1970 (also known as the Biafran War) was fought between the government of Nigeria and the secessionist state of Biafra. The secession of Biafra was mostly led by the Igbo ethnic group due to economic, cultural, and religious tensions among the peoples of Nigeria. This secessionist movement, which supports the (re-)creation of an independent state of Biafra, continues to this day.

In October 2017, Nigeria’s National Communications Commission (NCC) reportedly ordered the blocking of 21 websites, almost all of which are associated to the secessionist movement of Biafra. Last year, these 21 sites were tested in Nigeria, the blocking of which was confirmed for most of them (excluding naij.com which was only temporarily blocked) on 3 local networks: Globacom (AS37148), MTN (AS29465), and Airtel (AS36873).

Recent OONI data analysis (of measurements collected between 1st February 2019 to 31st March 2019) not only shows that these sites remain blocked in Nigeria, but that they are also blocked by most local ISPs.

Our analysis of measurements from all 7 ASNs is available and visualized here.

The following sections show how the blocking of sites associated to Biafra differs across 3 of those ISPs: MTN, Airtel, and Globacom. We have chosen these 3 ISPs because (a) they allow us to compare findings with OONI Probe testing of the same sites from last year, and (b) the largest volume of stable measurements was collected from these 3 networks during the testing period of this study.

MTN (AS29465) continues to block sites associated to Biafra by means of DNS tampering. The same censorship techniques were also observed last year.

The following chart shows that almost all measurements consistently presented signs of DNS tampering between February 2019 to March 2019. 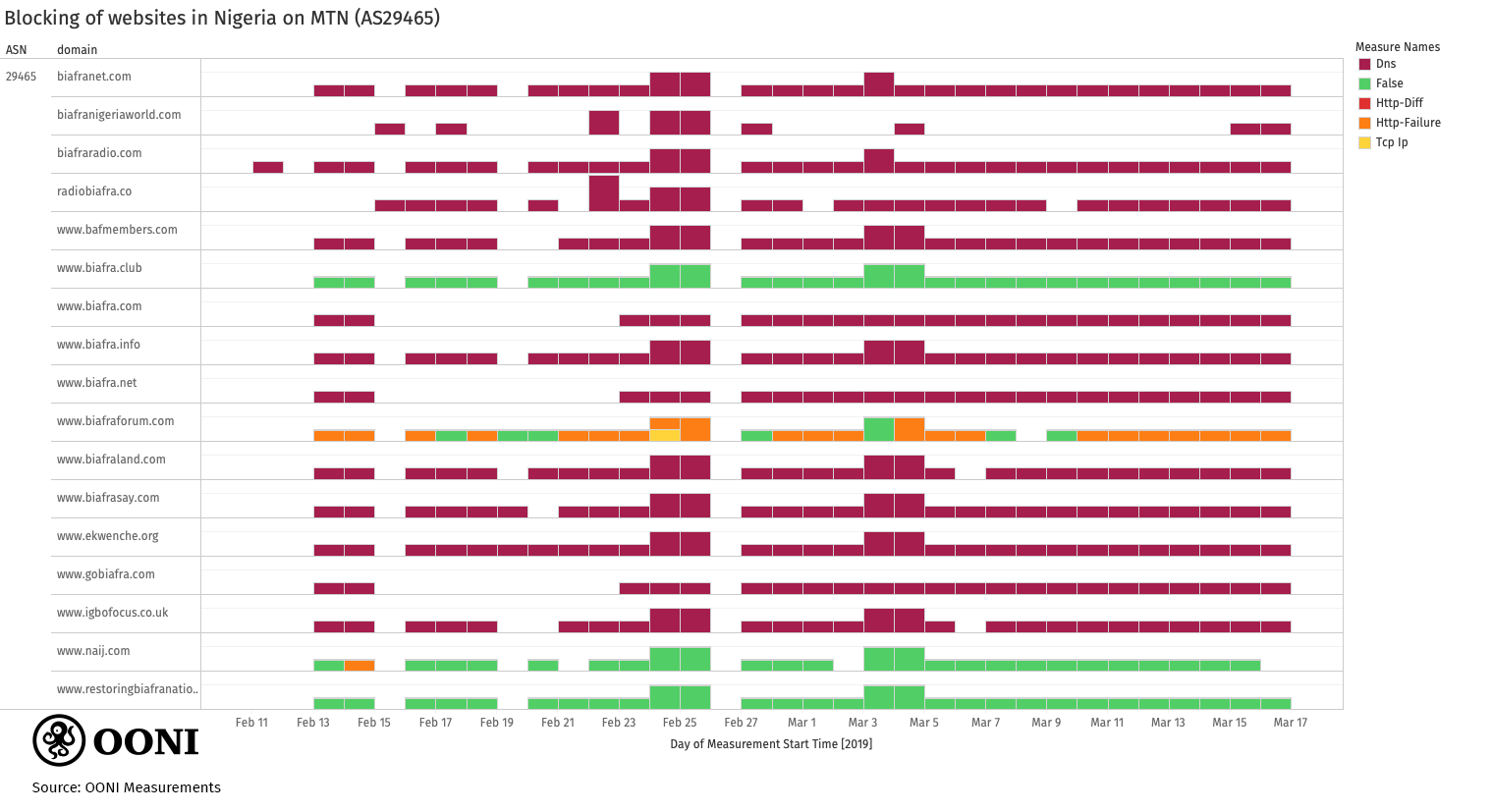 When blocking sites by means of DNS, MTN appears to resolve the domains of blocked websites to a private IP space (i.e. 192.0.0.1). Previous measurements collected over the past year have also shown this pattern. It’s possible that MTN may resolve blocked domains with unrouted IP addresses so that clients do not generate extra traffic (and potentially overload their network) when accessing blocked domains.

Previously, MTN used to block www.biafra.club by means of DNS, but recent measurements show that this block has been lifted - possibly because this site is no longer operational. Quite similarly, MTN does not block restoringbiafranationhood.info, which is not operational either.

What’s noteworthy is that, unlike the other sites, biafraforum.com is not blocked by means of DNS, but its testing presents HTTP failures. When this site was first tested in November 2017 (following the NCC’s blocking order), it was initially found to be accessible on MTN. When it was tested again in April 2018, it presented a connection error and signs of HTTP blocking. Similarly, recent measurements collected from February 2019 to March 2019 consistently present the same anomalies on the MTN network. This suggests that MTN is using a different censorship technique to block access to biafraforum.com (in comparison to other sites). 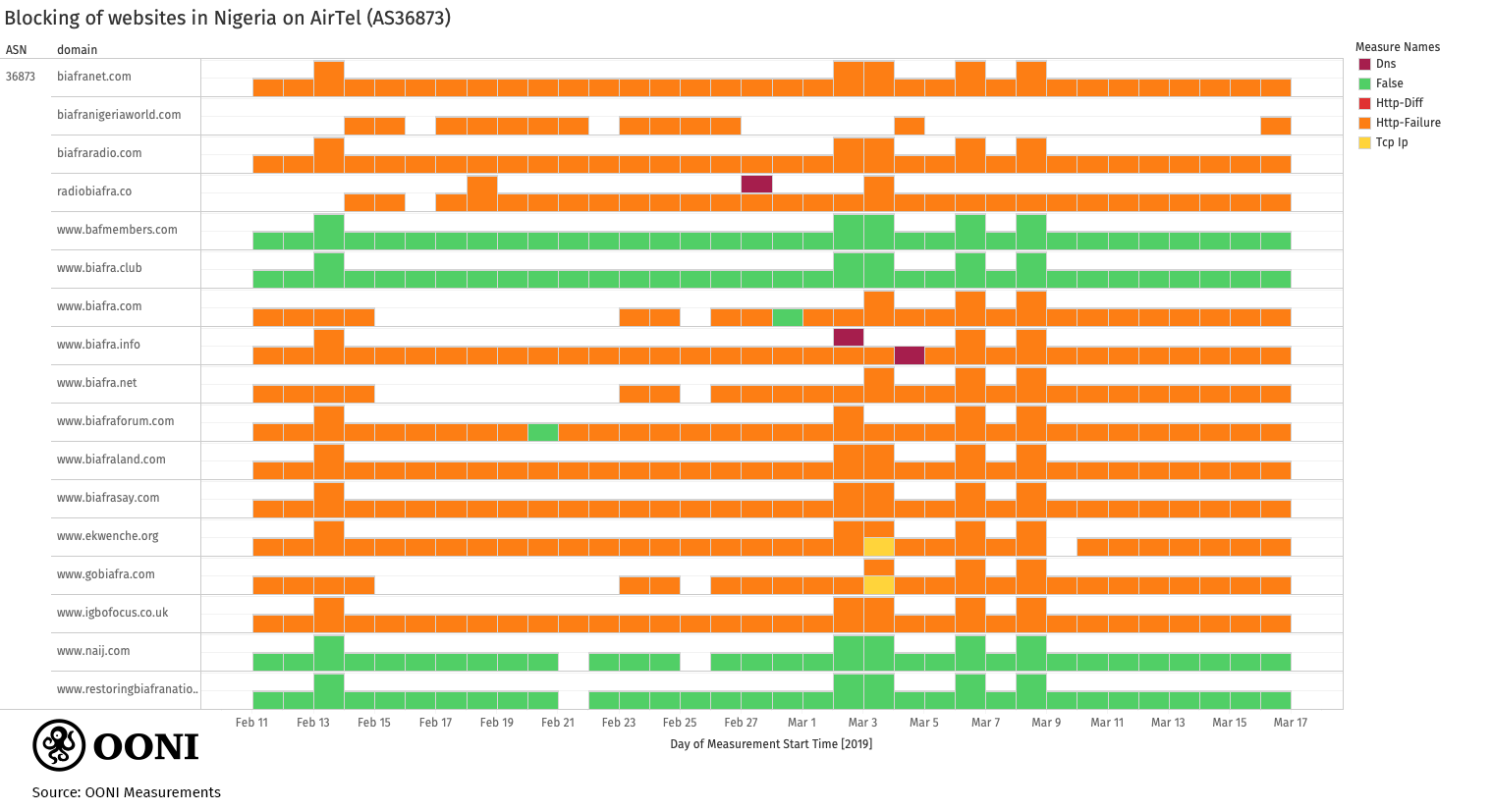 Exceptions include www.biafra.club and restoringbiafranationhood.info, neither of which are operational (and, similarly to MTN, Airtel appears to have unblocked access to www.biafra.club), as well as www.bafmembers.com, which remains accessible.

Recent OONI measurements show that Globacom (AS37148) continues (in comparison to last year) to block sites associated to Biafra primarily by means of TCP/IP blocking. 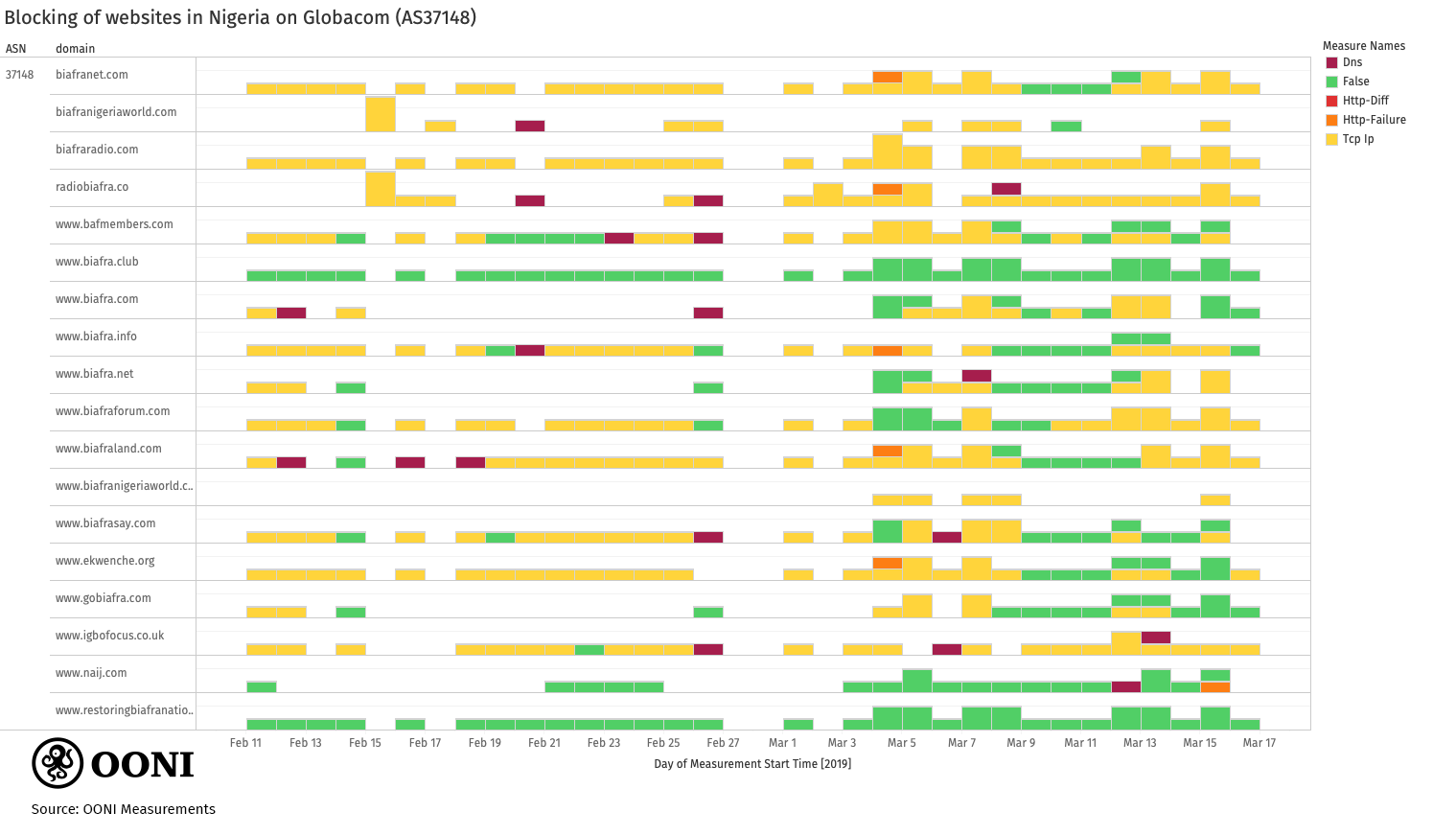 Similarly to MTN and Airtel, Globacom refrained from blocking www.biafra.club and restoringbiafranationhood.info (neither of which are operational). While TCP anomalies are observed with regards to the testing of www.bafmembers.com, some connections are successful. It is therefore quite unclear if the TCP anomalies were caused by transient network failures, or if access to the site was intentionally blocked. Similar inconsistencies are also observed in the testing of other sites as well (as illustrated in the above chart), suggesting limitations to how internet censorship is implemented on this network.

On Cobranet (AS35074) measurements collected from the testing of biafranet.com reveal the presence of a squid proxy, which is part of a zentyal installation. Judging by the software run on this proxy, it’s probably not carrier grade, but rather on the local network of the user. The relevant measurements show that the proxy says “connection reset by peer”, confirming the blocking of biafranet.com (since it does not respond to the local proxy).

Thousands of OONI measurements collected from 16 different ASNs between 1st February 2019 to 31st March 2019 suggest that major internet services were accessible in Nigeria throughout the 2019 general elections. Most of the tested websites were found to be accessible, while popular instant messaging platforms, WhatsApp and Facebook Messenger, were working as well.

However, a number of sites hosting content associated to the Biafra secessionist movement remained blocked. Recent OONI measurements show that Globacom continues to block these sites by means of TCP/IP blocking, MTN by means of DNS tampering, and Airtel at the HTTP layer. This is strongly suggested by the fact that the same network anomalies (in comparison to last year) are observed on the same networks with regards to the testing of the same list of sites. Out of more than a thousand URLs tested in total, only sites associated to Biafra consistently presented network anomalies throughout the testing period.