On 7th January 2019, a military coup was attempted in Gabon in a bid to end more than 50 years of rule by President Ali Bongo’s family. The coup attempt was quickly foiled. Security forces reportedly killed two suspects, arrested seven others, and Gabon’s government retained control.

Meanwhile, a curfew has been imposed and NetBlocks reported that access to the Internet has been shut down.

The Center for Applied Internet Data Analysis (CAIDA) runs a project called IODA (short for Internet Outage Detection and Analysis), which monitors the Internet, in near-realtime, to identify macroscopic Internet outages, affecting the edge of the network (i.e. significantly impacting an AS or a large fraction of a country). IODA does so via:

The following IODA chart clearly shows that access to the Internet was disrupted in Gabon at around 7am UTC on 7th January 2019 for 28 hours.

Around 75% of Gabon’s address space appears to have been withdrawn, while active probing and darknet measurements dropped as well, at around the same time. On 8th January 2019 at 11 a.m. UTC, Gabon’s prefixes came back online and connectivity recovered. The shutdown lasted for 28 hours.

This is not the first time that an Internet outage is observed in Gabon.

The country recently (11th December 2018) experienced a significant Internet outage, affecting more than half of its address space. In early September 2016, following the re-election of President Ali Bongo and amid clashes between opposition protesters and security forces, daily Internet outages were detected by IODA.

Through their Transparency Reports, Google shares product traffic data originating from all countries around the world. A visible decrease in traffic in a specific region may mean that users there cannot access certain Google products or services. Since Google services are widely used in most countries around the world, Google traffic data can provide strong signals when network disruptions occur. 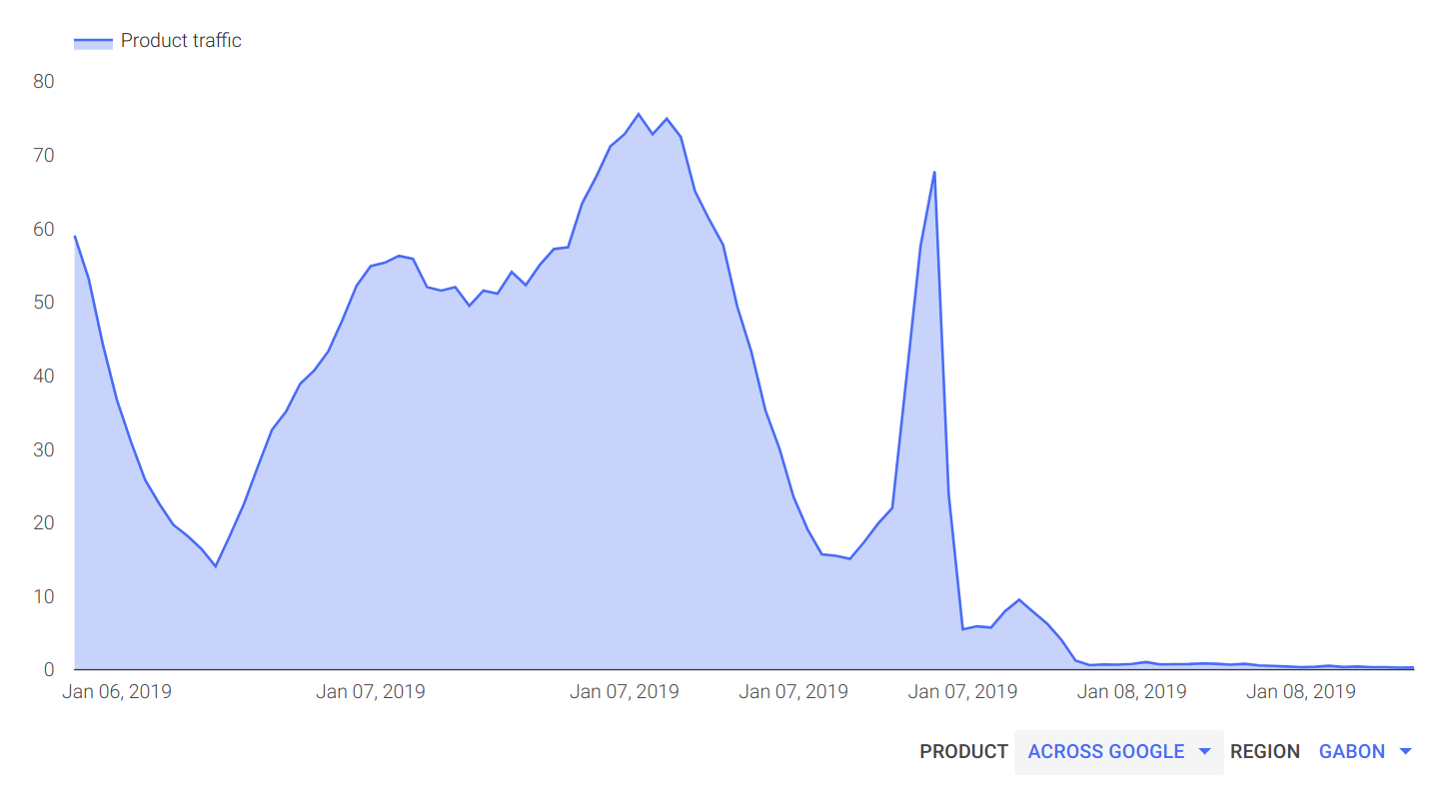 At the time of publication of this blog post, the Google Transparency Reports haven’t been updated with the latest data (limiting our ability to evaluate whether connectivity has been restored in Gabon based on Google traffic).

It’s worth highlighting that both Google traffic and IODA charts are rather consistent, even though they rely on different data sources. They both show visible drops on 7th January 2019 and signs of Internet disruptions in Gabon on 8th January 2019.