Last week we attempted to perform OONI network measurement tests in the Gambia to examine whether websites were blocked during its 2016 presidential election. But merely a few hours after we connected our probe to perform tests, it stopped working completely.

We suspected that this was due to an internet shutdown. To confirm this, we referred to third-party data to examine whether a country-wide internet blackout was taking place.

In this report, we summarize some of our key findings pertaining to the internet shutdown that appears to have occurred in the Gambia on the eve of its 2016 presidential election.

President Yahya Jammeh governed the Gambia for 22 years, following a coup in 1994. Since then, Jammeh won every election and reportedly stated that he intended to rule for “one billion years”. The opposition, however, became increasingly popular and Adama Barrow of the United Democratic Party won the last elections on 1st December 2016.

Thousands of opposition supporters demonstrated peacefully leading up to the elections. Omar Amadou Jallow, an opposition leader for the People’s Progressive Party, stated:

“For 22 years we have realized that Gambia has been turned into a prison; the arrests, the tensions, the torture and many of our people have gone into exile … That shows the tyranny of the regime.”

President Jammeh criticized the protests, arguing that there was no reason for anybody to demonstrate since the Gambia’s election system is rig-proof, and that “demonstrations are the loopholes that are used to destabilize African governments”.

Internet shutdowns, carried out for stifling communications amongst protesters, have become increasingly common in African countries during election periods. On the eve of the Gambia’s election, the Keep It On campaign published an open letter to President Jammeh, requesting that the internet is kept on to ensure the stability and openness of the internet during the 2016 elections. However, there appears to have been a country-wide internet blackout, as documented through data in the section below.

Through BGP announcement data aggregated by RIPE from 18 different Remote Route Collectors (RRC) we can see that the first update withdrawing a prefix inside of Gambia dates 2016-11-30 20:04:04.

Below are the times at which each of the RRCs saw the first Gambian prefix withdrawn.

At around this time it was confirmed from various sources that internet connectivity in the Gambia was being disrupted. 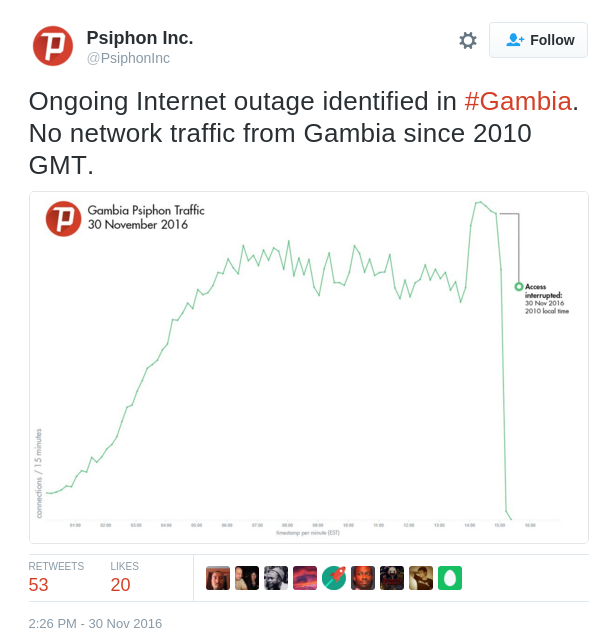 Worldwide traffic data from Google is also consistent with the above reports as illustrated below. 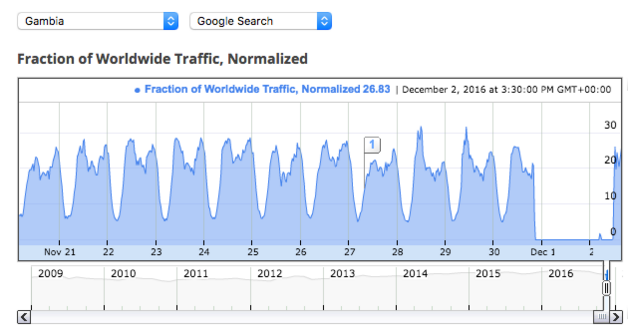 On and then off again

It remains unclear though if this was done intentionally, or if it was a mistake.

We can see, however, from the above Google traffic graph that some users at that time were accessing Google, indicating that connectivity was actually restored for a brief period of time and that people took advantage of it.

Internet connectivity though appears to have lasted for a very short amount of time, as the routes were unannounced at 5:06.

At 11:28 UTC of 2nd December the internet started being accessible again, as shown through the following announcements.

The time it took for each prefix to be announced again was fairly swift, leading us to believe that ISPs coordinated tightly with the government to roll out the blocking and the unblocking of the internet.

Several sources, including our own researchers on the ground, confirmed that the internet had started working again at 12:00 UTC of 2nd December, after the Gambia’s 2016 presidential election had concluded.

This can also be confirmed through the graphs below. 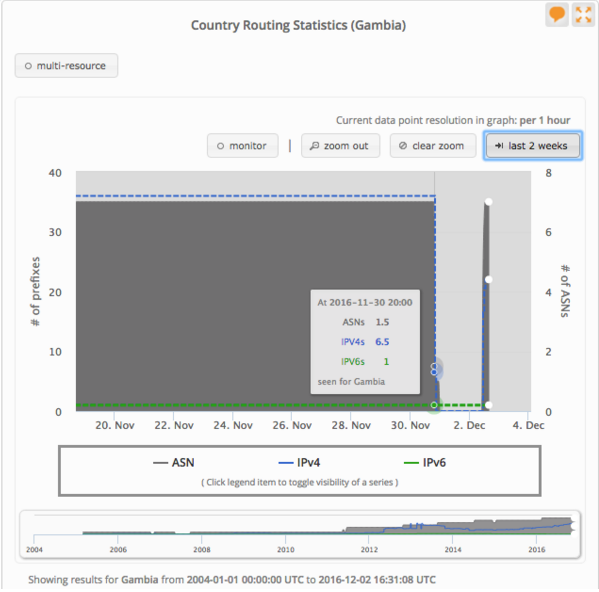 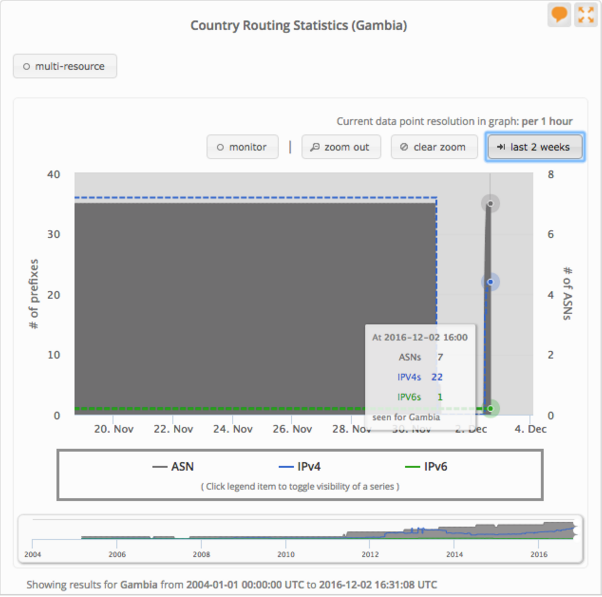 Internet shutdowns, especially when carried out during elections and other political events, pose restrictions to human rights because they limit the public’s ability to communicate, coordinate, share and access information. Shutdowns can also harm business interests and foreign relations, if carried out for extended periods of time.