Last weekend, a number of social media sites and news outlets were blocked in Pakistan during Islamist protests. Protesters gathered in Islamabad alleged that Mr. Zahid Hamid, the Federal Law Minister, should be removed from his position because he omitted a reference to the Prophet Muhammad in a parliamentary bill. On Saturday, 25th November 2017, law enforcement agencies initiated an operation to disperse the sit-in at the Faizabad Interchange linking Islamabad and Rawalpindi.

As information about the government operation was reported by the media, protests spread across the country, literally jamming roads and closing businesses. The Pakistan Electronic Media Regulatory Authority (PEMRA) prohibited live coverage of the operation at Faizabad, leading to governmental blocking of social media sites and online news channels.

In this post, we provide technical evidence of observed censorship events. We share OONI network measurement data collected from Pakistan, confirming the DNS-based blocking of Facebook, YouTube, Twitter, and Instagram. We confirm the DNS blocking of 14 news websites, as well as the censorship of applications including Facebook Messenger, Telegram, and WhatsApp’s web interface. All of these censorship events were temporarily implemented last weekend, and are no longer in place.

To confirm these reports and examine how the blocks were implemented, we analyzed OONI network measurement data collected from Pakistan. OONI Probe is free and open source software designed to measure internet censorship, including the blocking of websites. Community members in Pakistan have been running OONI Probe on a daily basis for more than a year, providing data on the changing availability of websites.

This is not the first time these sites have been interfered with in Pakistan. In our recently published research report in collaboration with Bytes For All, Pakistan, we analyze network measurements in the country from between 2014 to 2017. This study confirms observations of blocking the HTTP versions of certain YouTube, Facebook, and Twitter webpages hosting content related to the controversial “Draw Muhammad Day” (these webpages remain blocked today). This indicated that Pakistani ISPs applied “smart filters”, with targeted censorship of specific webpages.

Last weekend, however, these sites were entirely blocked. This was also reported in a press release by the Digital Rights Foundation (DRF) and NetBlocks. Rather than filtering specific webpages, ISPs blocked access to the encrypted HTTPS versions of facebook.com, twitter.com, youtube.com, and instagram.com by means of DNS tampering, rendering them inaccessible.

Similarly, WhatsApp’s web interface (web.whatsapp.com) appears to have temporarily been blocked on the 26th of November.

OONI’s WhatsApp test performs an HTTP GET request, TCP connection, and DNS lookup to WhatsApp’s endpoints, registration service, and web version over the vantage point of the user. In doing so, this test measures the reachability of both WhatsApp’s app and web interface. While web.whatsapp.com was likely blocked across three ISPs on 26th November (as illustrated in the table above), the WhatsApp app was accessible throughout the weekend in all vantage points where tests were run.

Telegram’s website was blocked last weekend in Pakistan, as illustrated through the table below.

But Telegram may have been blocked in Pakistan for a while. 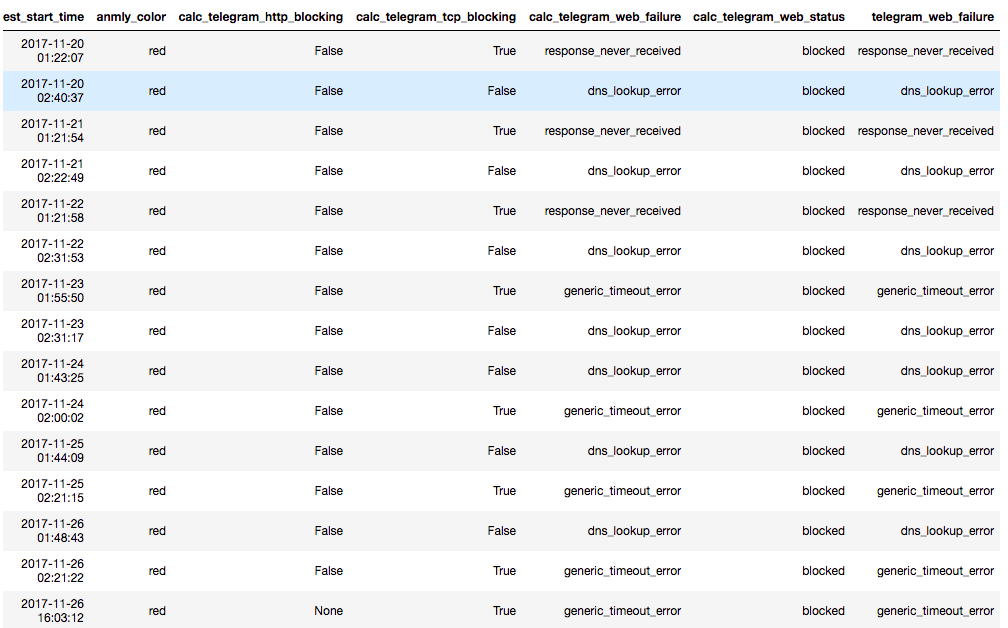 On Saturday, the Pakistan Electronic Media Regulatory Authority (PEMRA) prohibited live coverage of the operation at Faizabad, Islamabad, explaining why a number of online news channels were reportedly blocked.

This is the first time that we have observed censorship of news websites in Pakistan. Our previous study, involving the analysis of thousands of network measurements collected between 2014 to 2017, only allowed us to confirm the blocking of sites expressing religious criticism and minority sites.

The following software tools can be used for censorship circumvention:

To reproduce this study:

To view the results:

To view the details of each measurement, tap on “View” next to each tested site. If the site you selected is red, the measurement page will provide you the following information:

To run more OONI Probe tests and to schedule daily testing, consider running OONI Probe on Linux, macOS, or on a Raspberry Pi. All network measurement data will be published on OONI Explorer and on the OONI API, increasing transparency of internet censorship.