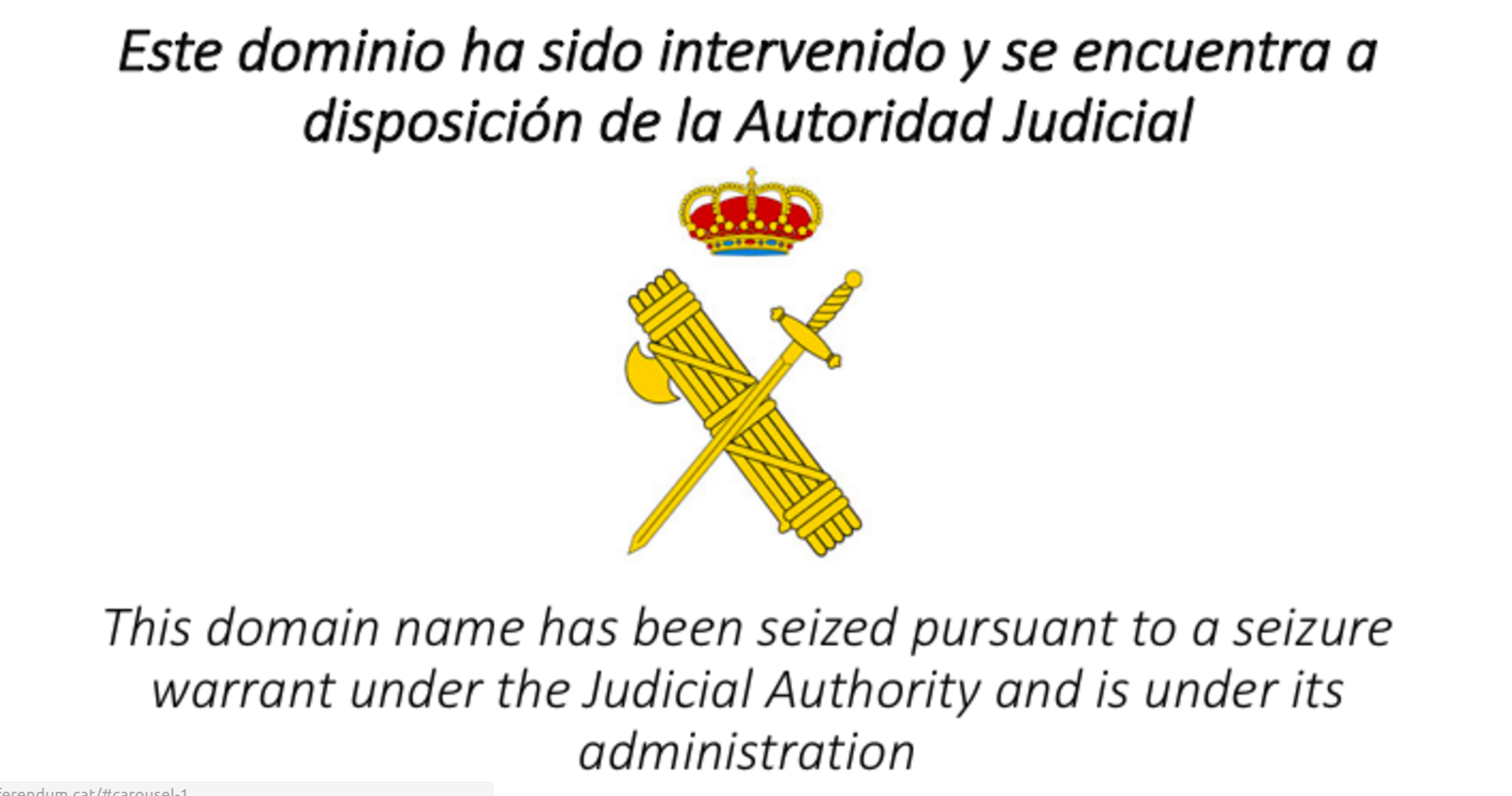 Two days ago, Catalonia held a referendum seeking independence from Spain. As the world awaits to see what happens next, we publish this post to share evidence of recent censorship events that occurred during and leading up to the referendum.

We confirm the blocking of at least 25 sites related to the Catalan referendum by means of DNS tampering and HTTP blocking, based on OONI Probe network measurements collected from three local networks. OONI data shows that these sites were blocked every day from (at least) 25th September 2017 (when the testing started) leading up to the referendum day, on 1st October 2017.

Catalans have their own language and cultural identity, despite being part of Spain. Their president Carles Puigdemont argues that they have a moral, cultural, economic, and political right to self-determination. In recent years, the Catalan independence movement has strengthened, particularly in light of Spain’s economic crisis. Many independence supporters argue that Catalonia has long been oppressed under the Spanish central government that does not acknowledge their “right to decide”.

Catalonia has seeked more autonomy and independence from Spain in various occasions. In 2006, Catalonia held a referendum amending the Statute of Autonomy of Catalonia, expanding its regional government’s authority. But four years later, Spain’s Constitutional Court reviewed the law upon request from the Spanish government led by the Popular Party (PP), re-writing and dictating the interpretation of many of its articles, and leading to a massive demonstration in Barcelona.

On 9th November 2014 (9N), Catalonia held a non-binding self-determination referendum, where voters were asked whether they wanted Catalonia to be a state and whether they wanted that state to be independent. Even though 80% of ballots were cast in favour of both questions (though the voter turnout was quite low), Spain’s Constitutional Court ruled the referendum “unconstitutional and null.” Such events paved the way for Catalonia’s latest referendum, but this time the Spanish government showed less tolerance.

Leading up to the referendum, Spanish police raided Catalan regional government offices and arrested senior officials. They also raided the offices of the .cat internet registry. Domains associated to the referendum, like referendum.cat and ref1oct.cat, have been seized. But censorship events were not limited to .cat domains. Many in Catalonia reported that access to various other domains (mirrors) related to the Catalan referendum were being blocked as well.

To ensure that voters could participate even if their appointed voting stations were shut down by the police, the Catalan government announced the “open census” in the morning of the referendum (1-O). Voters were offered the opportunity to choose any voting station in the country. However, the central system that validated that the voters were in the census was taken down by Amazon during the first hours of the day. Google was also previously ordered to take down a voting app that provides information about the polling stations for the Catalan independence referendum.

Despite all the attempts to block the process, alternative servers to count votes were deployed and the referendum (1-O) was held last Sunday. Locals reported that they had difficulty accessing the internet at the polling stations, but we don’t have data to confirm whether throttling or an internet blackout took place.

According to Catalan officials, 90% of more than 2.2 million ballots were cast in favour of independence. However, the referendum was far from peaceful, as heavy police violence resulted in hundreds of voters injured. Today, thousands are protesting against Spanish police violence on the streets of Barcelona, in response to the crackdown during the referendum.

Catalonia’s president asked the European Commission to encourage international mediation with Spain over the region’s independence. Madrid maintains that the referendum was illegal and its outcome therefore null. Spain is currently experiencing one of its biggest political crises in decades. Even Catalan society is quite divided on the question of independence.

We recognize the sensitivity of the current political situation. Through empirical data collected by OONI Probe community members in Spain and Catalonia, we aim to support public debate.

To collect evidence showing whether and how sites associated to the Catalan referendum were blocked, OONI Probe tests were run in Catalonia over the last week. OONI Probe is free and open software that anyone can run to measure the blocking of websites. All network measurement data collected by OONI Probe is automatically published to increase transparency of internet censorship worldwide.

OONI data confirms that, as of 25th September 2017 (when OONI Probe testing started), local ISPs have been blocking access to (at least) 25 Catalan referendum sites and continued to enforce the blocks on the referendum day.

The table below links to network measurements collected from three local ISPs and shows how and which sites were blocked on 1st October 2017, when the Catalan independence referendum was held.

OONI data shows that these mirrors were blocked by means of DNS tampering and through block pages served by HTTP transparent proxies. Daniel Morales, a freedom of expression activist who worked on the scripts to mirror the blocked sites, was called to appear in court on 22nd September and accused of being supported by Russian hackers by El Pais, one of Spain’s largest media outlets.

France Telecom Espanya (AS12479) and Euskaltel (AS12338) blocked access to sites by means of DNS tampering, while Telefonica de Espanya (AS3352) served block pages through the use of HTTP transparent proxies. It’s worth noting that France Telecom Espanya (AS12479) and Euskaltel (AS12338) didn’t block certain .cat domains (referendum.cat and ref1oct.cat), likely because those sites had already been seized. Telefonica de Espanya (AS3352), on the other hand, reinforced the censorship by serving block pages for seized domains as well.

OONI data shows the blocking of the above sites leading up to the referendum, between 25th September 2017 to 1st October 2017. Such data can be accessed through the following steps:

Alternatively, the data can be download and analyzed through json files included in OONI’s API.

Other measurements collected from sensors that provide DNS historical values show that referendum.cat was redirected to the domain paginaintervenida.edgesuite.net hosted by Akamai on 13th September.

As of 3rd October 2017, the following domain names are redirected to paginaintervenida.edgesuite.net:

All the .cat domains have been taken down as the result of the court order that Fundacio .cat received on 15th September from the Tribunal Superior de Justicia de Cataluña (TSJC). The director of research and information of the organization that runs the Catalan top level domain .cat, Pep Oliver, was detained on 20th September and retained under custody for 60 hours.

In summary, three main techniques have been used to censor Catalan referendum sites:

OONI data shows that France Telecom Espanya (AS12479) and Euskaltel (AS12338) adopted this technique to block sites related to the Catalan referendum.

This technique inspects, intercepts and alters web traffic so that HTTP and/or HTTPS requests to URLs are replaced by a new page (“block page”) indicating that they have been blocked.

OONI data shows that Telefonica de Espanya (AS3352) adopted this technique to block sites related to the Catalan referendum. Traffic recordings and analysis of the blocking indicate that Telefonica might be using Israeli technology from Allot Communications.

The future of Catalonia remains quite unclear. What is clear is that it’s important to keep those in power to account, even in “Western democracies”. One way of doing so is by measuring networks and increasing transparency of information controls.

Update (2017-10-05 16:30 UTC): As community members in Spain and Catalonia come across more blocked sites, they are added to this list here.

Update (2017-10-03 20:38 UTC): Courtesy of our friends from Security Without Borders, you can run OONI Probe to test Catalan websites for censorship by clicking on the “Run OONI” button below: