Last October, Nigeria’s National Communications Commission (NCC) reportedly ordered the blocking of 21 websites. In response, we collaborated with Nigeria’s Paradigm Initiative to test those websites and collect network measurement data that can shed light on whether and how they’re blocked.

Our findings are included in a joint research report that we published today with Paradigm Initiative. The full report, titled “Tightening the Noose on Freedom of Expression: Status of Internet Freedom in Nigeria 2018”, can be downloaded here. A summary of the report is available here.

This post summarizes OONI findings pertaining to these websites, as well as our analysis of all other OONI measurements collected from Nigeria over the last year.

OONI’s Web Connectivity test is designed to measure whether access to websites is blocked by means of DNS tampering, TCP/IP blocking, or by a transparent HTTP proxy.

Most Web Connectivity measurements in Nigeria have been collected from mobile networks, primarily testing the websites included in the Citizen Lab’s global test list. OONI data shows that most websites tested in Nigeria over the last year have been accessible. The accessible sites include popular media websites, human rights sites, communications platforms, circumvention tool sites, and even more provocative or objectionable sites, such as pornography and gambling sites.

In November 2017, however, Paradigm Initiative reported that Naij, a popular news outlet, and twenty other websites were blocked. Following this report, we shared an OONI Run link on social media, encouraging locals in Nigeria to test those sites. Out of the 21 websites Paradigm Initiative reported to be blocked, only 17 of them were tested (excluding biafra.net, biafra.com, biafra.club, and restoringbiafranationhood.info).

Biafraforum.com was found to be accessible, while the following 16 sites were found to be blocked by means of DNS tampering in November 2017:

OONI data (linked above) corroborates Paradigm Initiative’s report on the blocking of those websites. It’s worth highlighting though that the above sites were only tested once on 22nd November 2017 in the MTN (AS29465) network.

In recent months, the 21 sites that were reported to be blocked in November 2017 have been tested again. The table below summarizes OONI findings from the most recent testing (April 2018).

News outlet naij.com no longer appears to be blocked. OONI measurements collected in April 2018 show that the news website was accessible from (at least) three local vantage points. Biafraforum.com, on the other hand, was previously found to be accessible in November 2017, but recent measurements from April 2018 show that it’s likely blocked by two ISPs. It remains unclear though when the block was lifted and enforced for these sites, since they weren’t tested between 22nd November 2017 to 24th April 2018.

Recent measurements involve the testing of four sites (biafra.net, biafra.com, biafra.club, and restoringbiafranationhood.info) that weren’t previously tested in November 2017, but which Paradigm Initiative reported to be blocked. Three of those sites (biafra.com, biafra.net, biafra.club) were found to be blocked in April 2018, suggesting that they may have been blocked since November 2017 (when ISPs reportedly started blocking sites associated to Biafra). Recent testing of restoringbiafranationhood.info, on the other hand, shows that the site was accessible in two networks in April 2018.

What’s noteworthy from the above table is that Nigerian ISPs appear to be quite consistent in the types of censorship techniques that they adopt. Globacom appears to primarily be blocking sites by means of TCP/IP blocking, MTN by means of DNS tampering, and Airtel always appears to be blocking sites at the HTTP layer. The measurements that show “generic timeout errors”, “DNS lookup errors” and “connection errors” present signs of network anomalies, but do not necessarily serve as evidence of internet censorship, since they may have occurred due to transient network failures. While Globacom, MTN, and Airtel appear to consistently block the same sites on the same dates, it’s worth noting that Airtel did not block two sites (ustream.tv and bafmembers.com) that appear to have been blocked by Globacom and MTN.

Another interesting pattern that we see in the measurements is that Nigerian ISPs appear to be using reserved (and historically unrouted) IP addresses, such as 192.0.0.1 and 1.1.1.1, as the spoofed DNS response. This technique seems to be used by MTN, which resolves blocked domains to 192.0.0.1, and by Airtel, which resolves blocked domains to 1.1.1.1. This could be due to the fact that resolving blocked domains with unrouted IP addresses leads to clients not generating any extra traffic (and potentially overloading their network) when accessing blocked domains. It’s worth noting, however, that the 1.1.1.1 IP address is actually no longer an unrouted IP address and is now being used for the CloudFlare DNS resolver.

Block pages are essential for confirming censorship events with absolute accuracy. Given that Nigerian ISPs do not appear to serve block pages (at least for none of the tested websites), our confidence in confirming the potential censorship events outlined in the above table is quite limited. When blockpages are not served, OONI relies on analyzing large volumes of network measurements collected over an extended period of time (to identify whether censorship patterns are persistent and to better rule out false positives). The latest measurements, however, were collected on 25th April 2018, while the sites that were initially identified as blocked in November 2017 weren’t tested in the interim leading up to 24th April 2018, limiting our ability to identify censorship changes.

Nonetheless, the measurements collected for the testing of the 21 sites strongly suggest that many of them have been blocked, primarily due to the following reasons:

Out of the 21 sites reported to be blocked, almost all of them are associated with content on the secession agitations for Biafra in Eastern Nigeria. What’s interesting is that (excluding restoringbiafranationhood.info, which is no longer operational anyway) news outlet naij.com is the only site that currently appears to be accessible, while all other sites (which are associated to Biafra) appear to be blocked (and may have remained that way since November 2017).

Recent measurements from the last months show that popular instant messaging apps were accessible in the country. These measurements were collected through OONI’s WhatsApp, Facebook Messenger, and Telegram tests which measure the reachability of these apps.

It’s worth noting that these findings are limited to the specific networks where tests were run, as well as to the dates and time of testing. As a result, it remains unclear if any of these instant messaging apps were blocked by different ISPs in Nigeria, and/or if they were blocked in different moments in time when tests weren’t run.

Popular circumvention tool sites (such as ultrasurf.us, hotspotshield.com, and torproject.org) were found to be accessible in Nigeria throughout the testing period.

OONI’s Vanila Tor test is designed to measure the blocking of the Tor network. This test has only been run once in Nigeria (in June 2017) and the collected data shows that the Tor network was accessible in the country. This is also suggested through Tor Metrics which show relatively stable connections to the Tor network from Nigeria over the last year, as illustrated in the graph below. 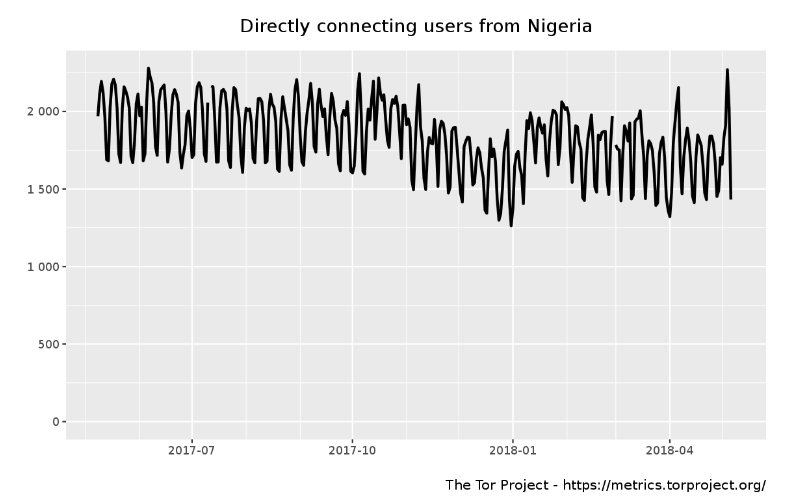 OONI is based on free and open source software, open methodologies, and open data, enabling the independent verification of findings and the reproducibility of this study.

To measure internet censorship based on OONI’s methodologies: