Resurgence of Internet Censorship in Ethiopia: Blocking of WhatsApp, Facebook, and African Arguments

Last year in June 2018, following years of pervasive internet censorship, Ethiopia unblocked hundreds of websites as part of political reforms under a new government. But merely a year later, we observe a resurgence of internet censorship in the country.

On 22nd June 2019, following an alleged coup attempt in the Amhara region, access to the internet was shut down again. Once internet access was restored, access to WhatsApp was blocked again. This time though, we observe the blocking of Facebook (facebook.com and Facebook Messenger), instead of Telegram (which was/is accessible). A few weeks later, we noticed the blocking of the African Arguments website as well, a pan-African platform covering investigative stories.

In this report, we share OONI network measurement data on these ongoing censorship events.

We previously reported on internet blackouts and the temporary blocking of Whatsapp and Telegram in Ethiopia during mid-June 2019.

One day after our publication, on 22nd June 2019, factions of the security forces of the Amhara region allegedly attempted an armed coup, during which the regional president was assassinated. It was subsequently reported that a nationwide internet blackout occurred, which can be verified by both IODA data and Google traffic data shared below.

The Internet Outage Detection and Analysis (IODA) project of the Center for Applied Internet Data Analysis (CAIDA) measures internet blackouts worldwide in near real-time. Their data, which is openly available, provides signals of an internet blackout in Ethiopia between 22nd June 2019 to 27th June 2019, as illustrated via the following chart. 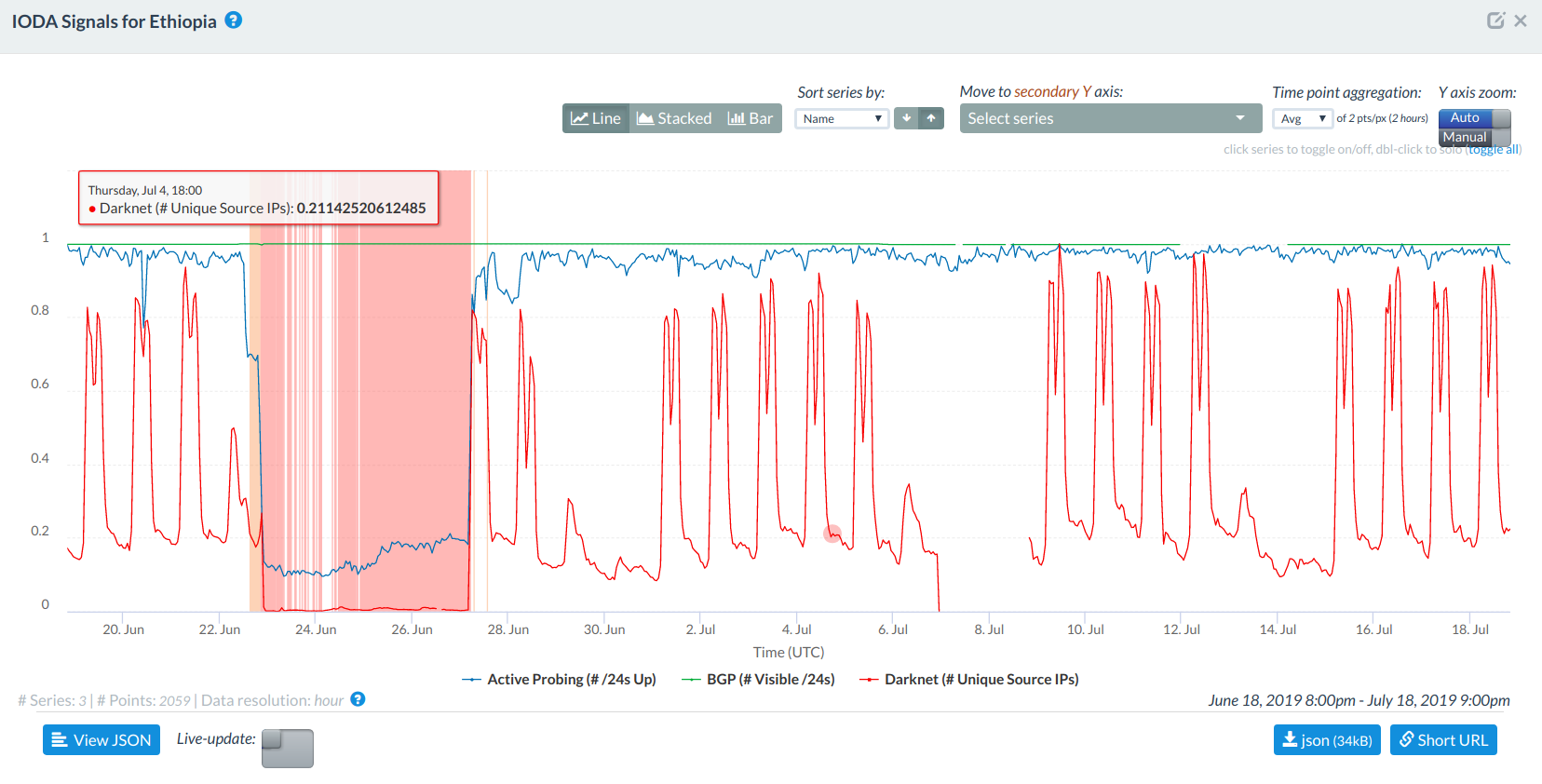 More specifically, IODA data shows that the internet outage appears to have started at around 20:00 UTC on 22nd June 2019 and to have lasted until around 06:00 UTC on 27th June 2019 (4 days and 8 hours estimate). Similarly, Google traffic data, shared below, illustrates that all traffic originating from Ethiopia towards Google services was disrupted during the same dates. 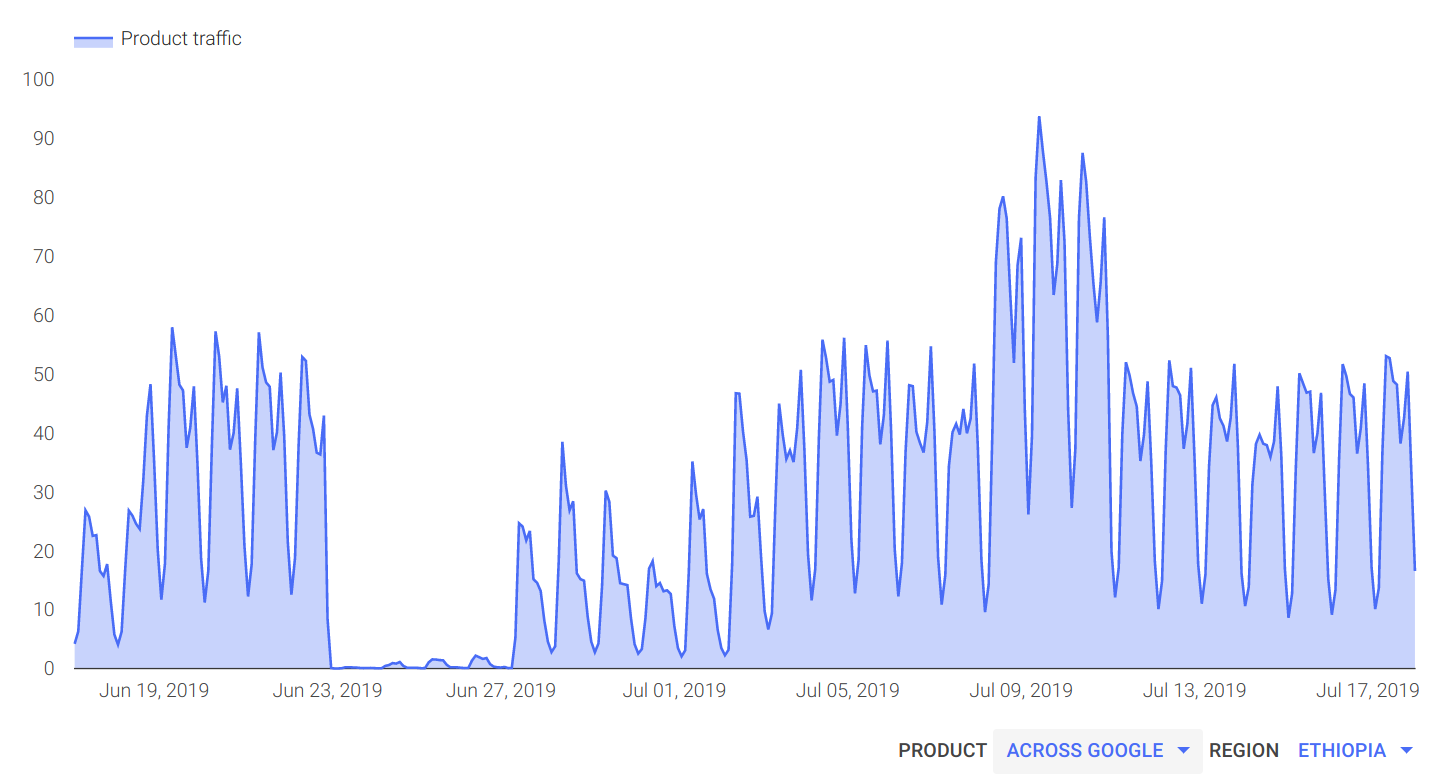 Once internet access was restored in Ethiopia on 27th June 2019, access to major social media platforms was blocked. Below we share OONI network measurement data on the blocking of WhatsApp, Facebook Messenger, and facebook.com.

Following the initial internet blackouts in mid-June 2019, WhatsApp was temporarily blocked when internet access was restored. At the time, we found that access to WhatsApp’s registration service and web version (web.whatsapp.com) were blocked by means of SNI filtering, but that Ethio Telecom (the only telecom in the country) refrained from blocking WhatsApp endpoints. OONI measurements then suggested that WhatsApp was unblocked on 17th June 2019.

But after the coup attempt and subsequent internet blackout (between 22nd to 27th June 2019), access to WhatsApp was blocked again and recent OONI measurements suggest that it remains blocked.

Once again, Ethio Telecom appears to block access to WhatsApp’s registration service and web version (web.whatsapp.com), but not to WhatsApp endpoints. This is evident in all OONI measurements collected between 17:53 UTC on 27th June 2019 to 14:58 UTC on 13th August 2019, as illustrated in the graph above. A measurement collected in the morning of 27th June 2019 at 08:56 UTC showed that WhatsApp was still accessible, suggesting that Ethio Telecom blocked access to the platform sometime between 09:00 UTC and 17:53 UTC that day.

WhatsApp appears to be blocked on both fixed-line (WiFi) and mobile networks.

Previously, Ethio Telecom blocked access to WhatsApp and Telegram after the mid-June 2019 internet blackouts. But after the attempted coup and the most recent internet blackout (which ended on 27th June 2019), Ethio Telecom appears to have blocked access to Facebook, instead of Telegram. Recent testing of Telegram from 27th June 2019 onwards shows that the app is not blocked in Ethiopia (though it remains unclear why Ethio Telecom chose to block Facebook, instead of Telegram, this time around).

Our attention was drawn to the alleged blocking of the African Arguments website in Ethiopia, a pan-African platform covering investigative stories and contemporary African stories. 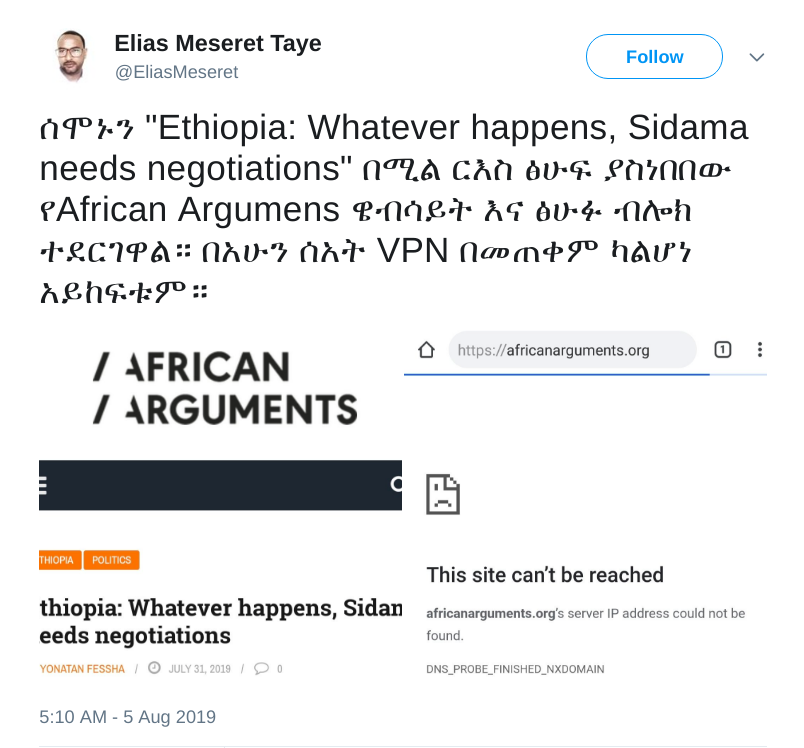 Several internet users in Ethiopia tried accessing the website to confirm and had mixed results. They reported that the website seemed to be accessible on fixed-line connection (in this case, WiFi), but not on cellular mobile data. When a VPN was used, they were able to access the website on both fixed-line and mobile networks.

A technical verification did in fact flag a form of censorship and corroborate the reports from Ethiopian internet users.

OONI’s Web Connectivity test (designed to measure the TCP/IP, DNS, and HTTP blocking of websites) was run in Ethiopia to measure the potential blocking of africanarguments.org. The collected measurements consistently present DNS anomalies on mobile networks, strongly suggesting that Ethio Telecom blocks africanarguments.org by means of DNS tampering. However, measurements collected from WiFi networks show that the site was accessible during the same period.

The following table shows that africanarguments.org is consistently blocked on mobile networks, but accessible on fixed-line networks (WiFi). 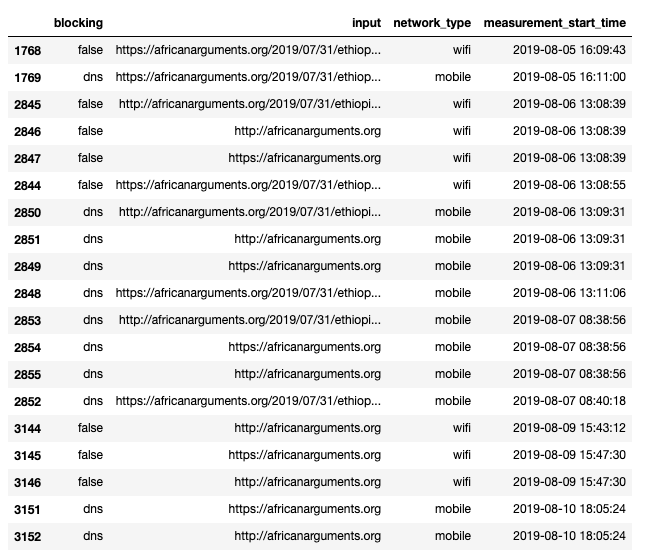 It’s unclear when the blocking started as africanarguments.org has only been tested in Ethiopia from 5th August 2019 onwards (which is also when locals reported the blocking). OONI Probe users in Ethiopia can continue to test the availability of the African Arguments website using this (OONI Run) link.

Ethiopia seems to be sliding back to old ways when internet censorship was a pervasive practice. After the political changes of 2018, hundreds of websites were unblocked, but the recent internet blackouts, social media censorship, and the ongoing blocking of WhatsApp and Facebook point to a dangerous path for freedom of expression, access to information, and associated human rights in the country. In addition, the lack of transparency and accountability as to why these websites and apps are blocked is a cause for concern.

Network measurement data collected from Ethiopia indicate a pattern: The lifting of complete internet blackouts is followed by the blocking of social media and messaging applications, with WhatsApp, Telegram, Facebook Messenger, and facebook.com being the most affected. We also observed more censorship on mobile networks than on fixed-line (WiFi) networks.

This study can be expanded upon through the use of OONI Probe and OONI data.