This post examines these disruptions and shares data that corroborates local reports.

It seems that the network disruptions were caused by an ACE submarine cable cut. Google traffic and BGP data suggest that the second disruption, following the runoff elections, could be an internet blackout.

President Koroma is stepping down, having served ten years in office.

General elections were held on 7th March 2018 and the opposition, Sierra Leone People’s Party (SLPP), won slightly more votes than the ruling All People’s Congress (APC). Following allegations of ballot tampering, a second round of elections was announced for 27th March 2018. The presidential runoff though was delayed amid claims of fraud and police harassment and held last Saturday, on 31st March 2018.

Throughout the election period, the Open Observatory of Network Interference (OONI) and the Campaign for Human Rights and Development International (CHRDI) collaborated on the collection and analysis of network measurements with the aim of monitoring the accessibility of sites and services.

Network measurement data collected via OONI Probe (OONI’s software designed to measure internet censorship) shows that local and international sites and services were accessible. OONI data shows no signs of internet censorship throughout Sierra Leone’s 2018 election period, though the findings are limited to the tests run and the sites and services tested. It’s worth noting that even though WhatsApp and Facebook Messenger were accessible, their testing presented high execution time, indicating some form of performance degradation on the network.

After the polls closed on Saturday night, Sierra Leoneans reported that the internet was shut down completely for several hours. The CHRDI published an open letter, urging the government to ensure the stability and openness of the internet during the counting process.

We started off by looking at Google traffic data. Since Google products and services are commonly used in most countries around the world, monitoring internet traffic to such services can help evaluate whether an internet blackout has occurred or not.

Most internet traffic was uninterrupted, but towards the end of the month there are two noticeable network disruptions. The first occurred in the early hours of 30th March 2018, where there is a decrease in traffic from Sierra Leone to Google Search. The second occurred on the following night, where we can observe a complete drop in traffic towards Google Search from Sierra Leone (highlighted in red in the above chart). The lack of internet traffic for several hours on the night of 31st March 2018 and in the early hours of 1st April 2018 strongly suggests that an internet blackout took place in the country.

In our attempt to understand how and why these network disruptions occurred, we referred to data published for other neighbouring countries. BGP announcement data published by RIPE shows that network disruptions also occurred in neighbouring Guinea and Liberia, but only on 30th March 2018. Sierra Leone Cable Company (SALCAB) - which manages Sierra Leone’s connection to the ACE submarine cable - reportedly stated (archived) that the network disruption ahead of the elections was caused by a submarine cable issue between Nouakchott (Mauritania) and Dakar (Senegal). 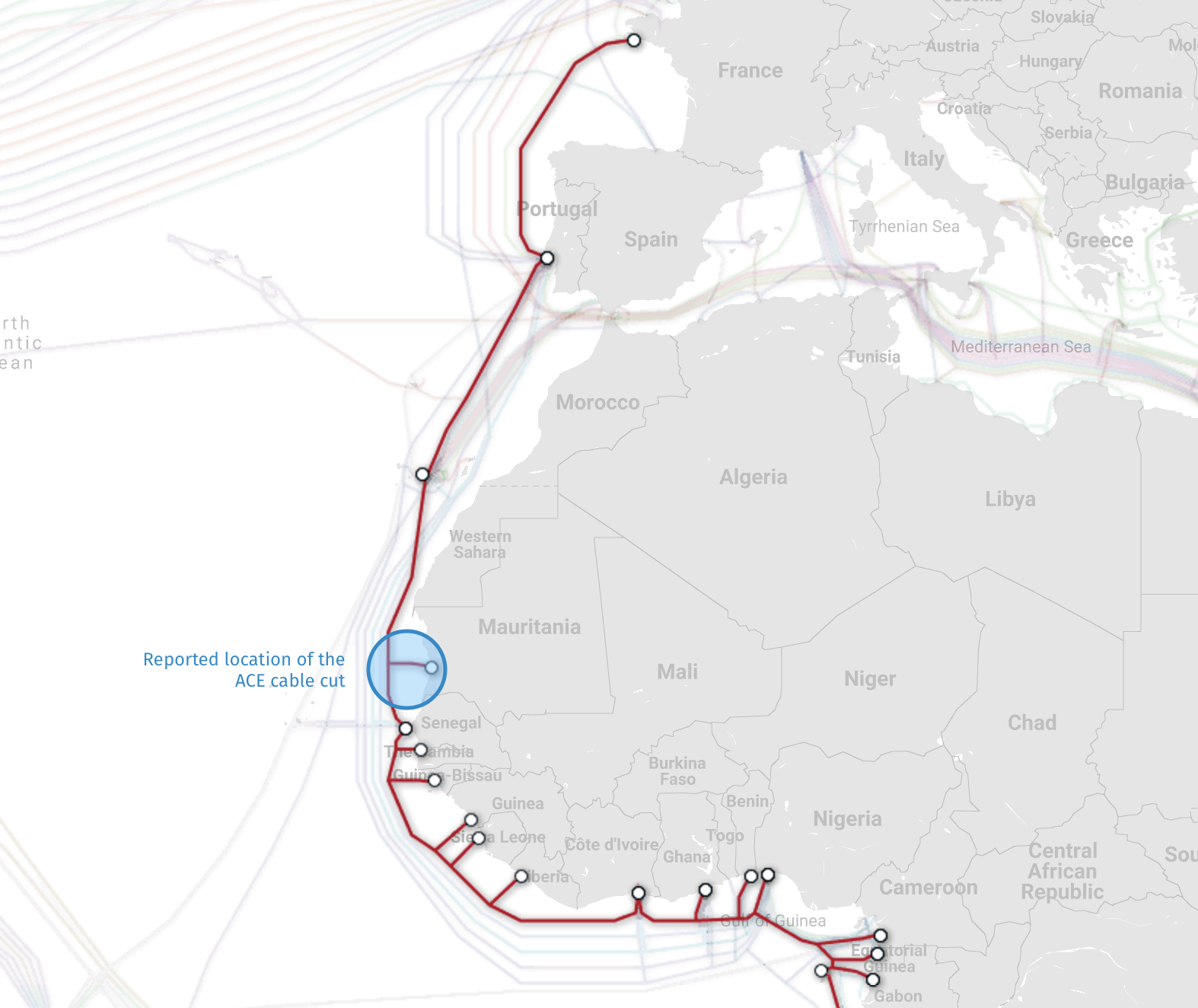 SALCAB released a public statement confirming that the network disruption was caused by an ACE submarine cable cut and that it affected other countries in the region as well.

However, the network disruptions on 30th and 31st March 2018 are inconsistent. The fact that the internet was not shut down completely in the early hours of 30th March 2018 means that other network paths towards Sierra Leone were probably possible. This is also suggested by RIPE data, which shows that only a few prefixes were withdrawn on 30th March 2018.

After the runoff elections, late at night on 31st March 2018, the data tells a different story.

Google traffic data shows that no internet traffic to Google Search originated from Sierra Leone. RIPE data shows that almost all prefixes were withdrawn. Both datasets show that no neighbouring country was affected, and that internet connectivity was restored the next day. If the second disruption was also caused by the cable cut (similarly to what is suggested for the previous day), other network paths towards Sierra Leone would have likely been possible. But according to Google traffic and BGP data, they weren’t. All of this strongly suggests that an internet blackout occurred in Sierra Leone following its second round of elections.

We reached out to Sierra Leone Cable Company (SALCAB), Africell and Orange to better understand how and why the two network disruptions occurred. We received a prompt reply from the Vice Chair of Africa to Europe (ACE) submarine cable who said:

Sierra Leone’s National Telecommunications Commission (NATCOM) also denied reports that it ordered the shutdown of the internet following the elections. They claim that the network disruptions were caused by issues pertaining to the cable cut.

We will update this post when/if we hear from the other providers we reached out to.