The following article is a guest blog post by Mr T. an independent researcher and provider of hosting to various grass roots organizations.

This article summarizes how we discovered that the grass roots online newspaper Zambianwatchdog.com was being blocked inside Zambia. This report provides technical evidence of the unlawful presence of Deep Packet Inspection in the country to monitor the Internet communications and stop users from browsing the website.

The connection was reset

On Monday 24 June 15:30 GMT readers of the website Zambianwatchdog.com from inside Zambia were reporting error messages. 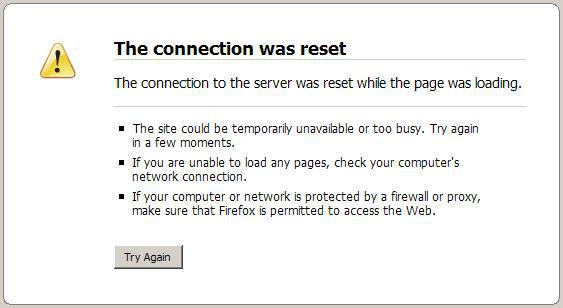 As hosting providers of the website, we initially could not see a significant drop of active connections and we needed to have a close look into the access logs of the site. Examining the connection logs to find any pattern that could help us to determine the cause of the problem was not a straightforward task as we needed to examine several gigabytes of data. It is worth mentioning here that Zambian Watchdog ranks 8th overall biggest website in Zambia and probably the biggest site after the large portals Facebook, Google or Youtube.

Our first review of the logs revealed a clear increase of connections reporting status code 200 but with zero bytes were transmitted back to the client.

The server has large number of logs similar to this one:

The sample shows that IP address of this connection 41.72.105.x belongs to ZAMTEL, the status code of the connection is 200 and zero information was sent back to the client.

The status code 200 indicates that the client’s request was successfully received, understood, and accepted by the server but for some unknown reason no information was send back to the client.

In order to determine if this was a general problem of our servers we examined the last four weeks of connection logs to conclude that there was inexplicable increase of connections with status code 200 and zero bytes transmitted starting that day.

We also looked into which readers were affected by this behavior and we concluded that the majority of the connections reporting this problem were from operators inside Zambia with the exception of MTN.

Origin of the dropped connections to the webserver

Who is breaking the connections?

Four hours after we received the first reports of service outage inside Zambia we could narrow down the problem to what it was perceived in the server side as sudden termination of the connections.

Comparing the connection logs of different weeks we could determine that connections coming from at least these operators AS37146 realtime-as, AS37214 MICROLINK, AS28698 UUNET Africa, AS37287 ZAIN-ZAMBIA and AS37154 ZAMTEL were suffering from some kind disruption.

In order to determine what kind of interference was taken place we proceed to capture the network traffic arriving to Zambian Watchdog’s server to look for any special patters that could help us to understand why most of the readers inside Zambia were experiencing connection drops with the exception of readers using MTN mobile network.

The readers seemed to be able to establish the initial connection with the webserver but as soon as they request any content of the website we received also a request to terminate such connection.

We proceed to examine our own generated connections from inside Zambia in real time and discovered that the undesired termination was taken place if the HTTP Header Host: www.zambianwatchdog.com was present in the request.

For example, we could see that a connection requesting the Breaking News section of the site from a Nokia phone, using Celtel 3G network was always quickly terminated after this request arrives to the server.

DPI or not DPI?

What it was left to determine if the filtering was looking into other aspects of the connection. In order to find out we run a few extra tests, requesting access to the webpage using other headers. We tested requests using the following headers

To our surprise we discovered that the “reset” of the connections was only talking place when we used the header www.zambianwatchdog.com and not when using any of the other combinations. After twelve hours we could confirm that malicious traffic was not generated by the readers but was actively injected into the network when a reader was requesting content from the website www.zambianwatchdog.com and that this behavior could only be explained by the presence of deep packet inspection (DPI) equipment inside Zambia.

Not until we technically verified and gathered forensic evidence of the blocking we adviced to the website owners to inform to the general public that such active interference was talking place and that the blocking was clearly targeted against the website.

To ensure the public visibility of the website inside Zambia and in order to look for a quick solution to put the website online, we tested the availability of the blocking technology to interfere with encrypted traffic. After testing the encypted (SSL) traffic was not suffering from such type of interference the decided to make the site available only via HTTPS.

To our surprise, several popular Word Press plugins of the website needed some tweaks so the full content was delivered encrypted to the readers.

We have also included the header

to ensure that the readers that have reached the website at least once via HTTPS will keep doing it so without the need to specify HTTPS in their future requests.

Inspired by the work of our colleges of the Open Observatory of Network Interferece (OONI) we conducted another run of tests to determine if any of 1000 top Alexa websites was blocking. The result of the testing is that we could not find any other website blocked with the exception of the Zambian Watchdog.

Three weeks after we initially detected and fingerprinted the blocking, the filtering is still active. Unencrypted requests to the domain zambianwatchdog.com remain unblocked while connections using www.zambianwatchdog.com trigger a reset.

Our test software that runs inside Zambia still reports interference when using www.zambianwatchdog.com

While such interference is not present when dropping the www.

After we unveiled the blocking and network monitoring, Zambian Watchdog has received information from whistle blowers of the presence of such infrastructure.

“They have also installed equipment a Lamya (1) in order to monitor people blogging on a site like yours and also blocking watchdog. This is also affecting all the other internet service providers who are using Zamtel as a currier and service provider. Also the CODEX (2) which interconnects all ISP is based at Lamya and this has given OP (3) access to all the ISP in Zambia.”

Further information about the case:

Sata orders op to block zwd on mtn as well

On Tuesday 16th of July 2013 (14:43 GMT) just a few hours after this article was released, the government has moved forward in their determination of blocking the site and started to block the SSL connections. The Deep Packet Inspection gear seems to be monitoring the “Server Hello” message that is part of the SSL negotiation. This message contains the string zambianwatchdog.com before the SSL negotiation is completed.

In order to find out if the government is actively making changes, we deployed a new mirror server of the site in the domain http://zwd.cums.in. After a few hours the domain has also been blocked and the filtering has been extended to the whole /24 network. By extending the filtering the Zambian government has also blocked hundreds of other organizations that are hosted in the same provider.

This is an example of the logs in the server side. We can see that the attack they are conducting leads to 0 bytes being transmitted and an error code 400 is generated (Error 400 (Bad Request) takes place when the request to a SSL is malformed.).