Last week, protests erupted in Zimbabwe in response to the government’s announcement that the price of fuel would more than double. According to Zimbabwe’s government, the price hikes aim to avert fuel shortages and to crackdown on the illegal trading of fuel. The new prices, however, mean that Zimbabwe now has the most expensive fuel in the world.

Zimbabwe’s fuel protests lasted for three days (14th to 17th January 2019), during which 12 people were reportedly killed and many more beaten by security forces. It is estimated that 78 people were treated for gunshot wounds, while hundreds of protesters were arrested by the police.

Amid the violent crackdown of protests, access to social media was blocked and the internet was temporarily shut down completely (possibly in an attempt to prevent censorship circumvention, particularly in light of increased VPN usage).

Internet access in Zimbabwe has since been restored, but certain social media apps remained blocked until 21st January 2019, when the High Court ruled that the internet blackouts were illegal. Internet service operators immediately restored social media services following this ruling.

In this report, we share OONI data that shows the blocking of social media during Zimbabwe’s fuel protests. We also share IODA data which sheds light on the two internet disruptions that occurred in the country over the last week.

Facebook, WhatsApp and Twitter were reportedly blocked during the fuel protests. To confirm this (and to examine how the censorship was implemented), local communities in Zimbabwe ran OONI Probe, which is free software designed to measure various forms of internet censorship.

The OONI Probe mobile app includes tests specifically designed to measure the accessibility of WhatsApp and Facebook Messenger (among other tests). These tests have been run in Zimbabwe fairly regularly since 2017 and most (if not all) collected measurements have always suggested that the apps were accessible locally.

Now, for the first time, we observe the blocking of WhatsApp in Zimbabwe, as illustrated below. 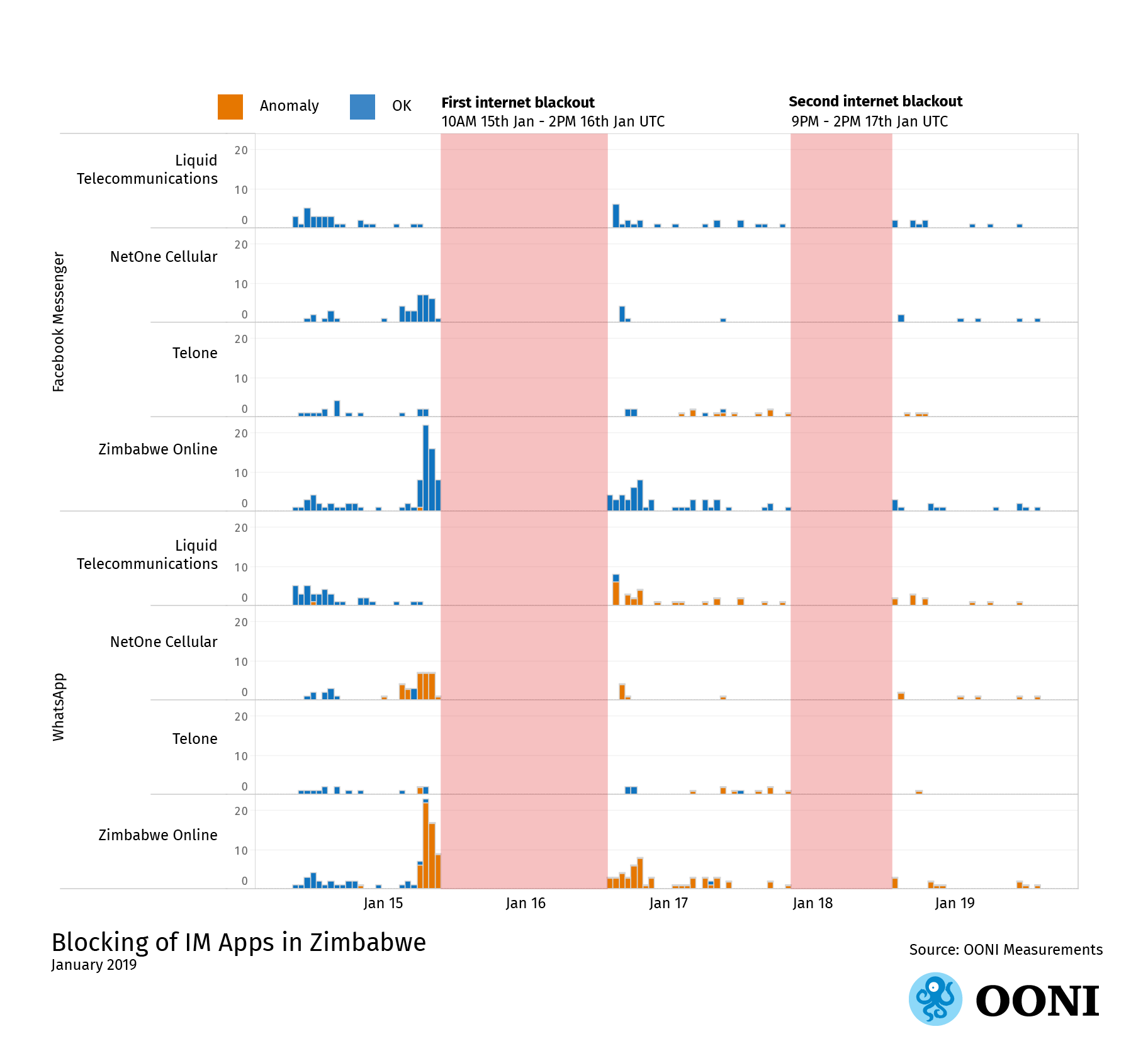 The above graph (based on openly available OONI data) compares the accessibility and blocking of WhatsApp and Facebook Messenger across 4 ISPs (from which most recent measurements were collected) in Zimbabwe between 14th January 2019 to 20th January 2019.

Even though Liquid Telecom, NetOne and ZOL didn’t appear to block the Facebook Messenger app, these ISPs may have blocked access to facebook.com. All recent measurements (from 17th January 2019 onwards) testing the accessibility of facebook.com (with OONI Probe’s Web Connectivity test) consistently presented the same HTTP failures on Liquid Telecom, suggesting that the ISP may have blocked access to Facebook’s website. Similarly, most Web Connectivity measurements testing facebook.com from NetOne, TelOne and ZOL present HTTP failures from 15th January 2019 onwards. The lack of recent measurements (post 20th January 2019) limits our ability to determine whether the site has since been unblocked, but this has been reported by locals.

It’s worth highlighting that via the above graph (displaying the timeline of collected measurements testing both WhatsApp and Facebook Messenger across 4 different ISPs), it’s evident that two internet blackouts likely occurred:

While OONI Probe is not specifically designed to measure internet blackouts (since OONI Probe requires internet connectivity in order to perform tests), the lack of measurements between the same time-frames, involving different tests, and across 4 different ISPs, suggests that the internet may have been shut down completely. Two internet shutdowns, during the same time periods, were also reported by the media and by our local contacts.

This may, in fact, be the first time that we are, indirectly, observing internet blackouts via OONI data.

Amid the deadly protests, Twitter was reportedly blocked in Zimbabwe as well.

Similarly to WhatsApp and Facebook Messenger, the following graph (based on OONI data) shows the blocking of twitter.com across 4 ISPs (Liquid Telecom, NetOne, TelOne, ZOL) between 14th January 2019 to 20th January 2019. 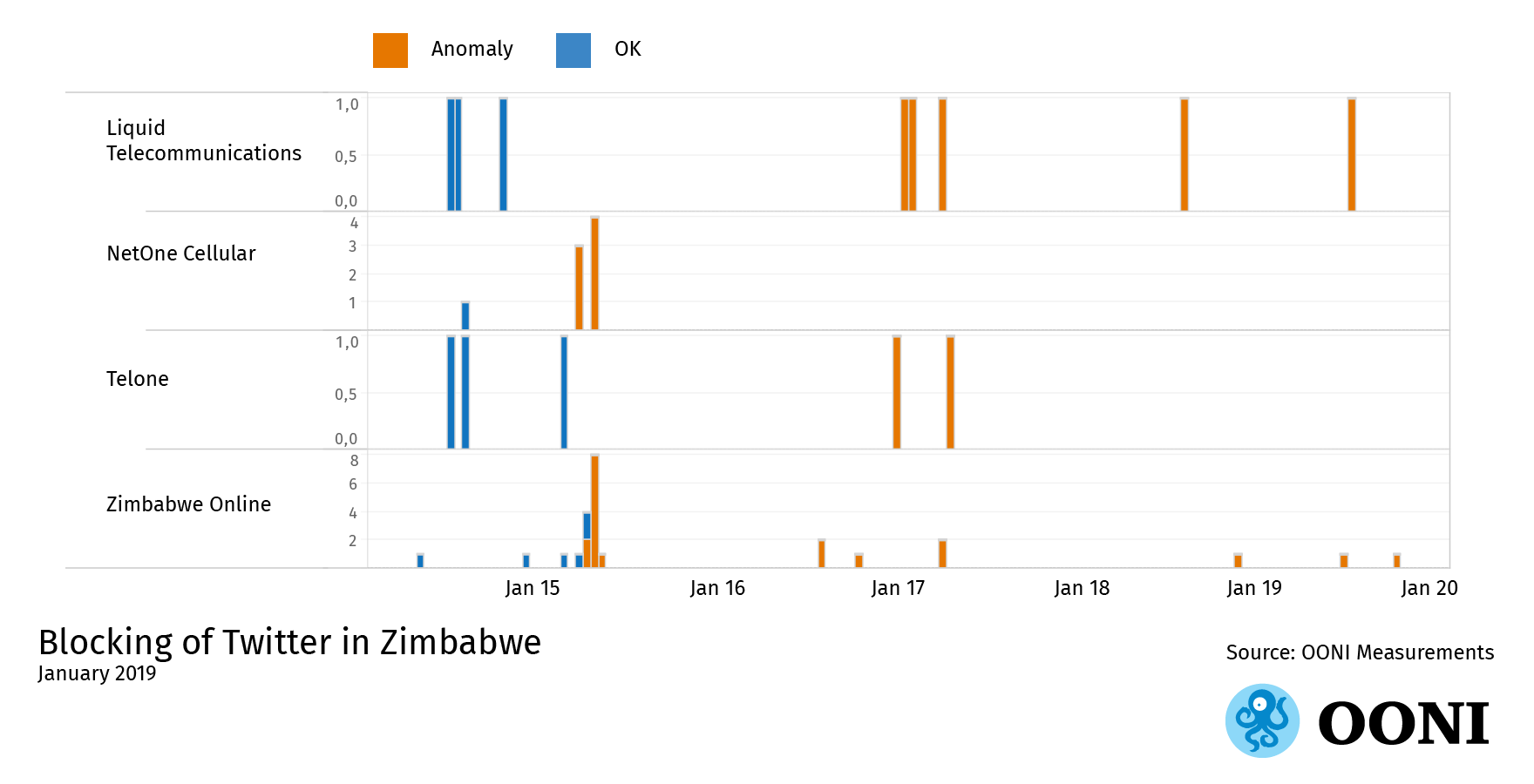 It’s worth highlighting that the internet blackouts observed via the previous graph (sharing data on WhatsApp and Facebook Messenger testing) are also observed with data pertaining to the testing of twitter.com. Across the same 4 ISPs, we can see the same lack of measurements during the same time frames between 15th to 16th January 2019 and 17th to 18th January 2019, further suggesting that two internet blackouts most likely occurred in Zimbabwe.

Almost all measurements from NetOne and ZOL present the same HTTP failures, suggesting that these 2 ISPs may have blocked access to instagram.com during the protests. Instagram was only tested on Liquid Telecom on 14th January 2019 and those measurements show that the site was accessible, but it remains unclear if this ISP blocked instragram.com thereafter.

YouTube was also tested on Liquid Telecom, NetOne, TelOne and ZOL between 14th to 17th January 2019, but the results are quite different. Most measurements presented HTTP failures on Liquid Telecom, TelOne and ZOL, but no anomalies were detected on NetOne (though youtube.com was not tested on this network after around 5pm UTC on 14th January 2019). YouTube was subsequently tested on NetOne on 21st January 2019, the measurement of which shows that the site was accessible.

As mentioned, the lack of OONI measurements across four different ISPs between two distinct time frames signals the possibility of two internet blackouts having occurred in Zimbabwe. This is further corroborated and more strongly suggested via CAIDA’s IODA data, illustrated below.

Starting at around 7am UTC on 15th January 2019, we can see a drop in the number of visible IP prefixes, along with a drop of reachable IPs in the Zimbabwean IP address space, as well as a drop of connection attempts from Zimbabwean IPs reaching the IODA darknet. By midnight, around 50% of Zimbabwe’s address space appears to have been withdrawn, with the internet disruption lasting for around 15 hours. By 3pm UTC on 16th January 2019, Zimbabwe’s prefixes started to come back online and connectivity was (mostly) recovered by 5pm UTC that day.

Both internet blackouts detected via IODA data are also confirmed by the lack of OONI measurements on the same dates and during the same time periods.

Although this was not the first time Zimbabwe experienced internet censorship - for example, the election-watchdog site, zimelection.com, was previously blocked following the country’s 2018 general elections - this was the first time that we observed social media censorship and a complete internet blackout in Zimbabwe (following years of collecting OONI measurements from multiple local vantage points).

On 21st January 2019, Zimbabwe’s High Court ruled that last week’s internet blackouts were illegal and ordered the government to restore full internet access to the whole country. Zimbabwean ISPs have since unblocked access to social media apps and sites.

Last week’s protests were triggered by the government’s announcement to increase the price of fuel, but they reflect a deeper dissatisfaction following decades of economic hardship. Robert Mugabe governed the country for more than three decades, but was ousted in 2017. Yet, the Zimbabwe African National Union - Patriotic Front (ZANU-PF) continued to govern Zimbabwe, this time under a new leader: President Emmerson Mnangagwa. The re-election of ZANU-PF, following the 2018 general elections, spurred violent riots in Harare. Following the latest protests, which were met with a violent crackdown by authorities, the United Nations has called for a probe into state violence in Zimbabwe.

As political events unfold, continuing to monitor internet censorship is essential. Since this study was carried out through the use of free and open source software, open data and open methodologies, it can be reproduced and expanded upon.

We thank all the Zimbabwean volunteers who have run OONI Probe, making this research possible.